Chandeliers made their first appearance in the 14th century and were solely made of wood. The name itself is derived from the French word chandelle referring to a light fixture with branch supports hanging from a ceiling. Early chandeliers were formed from two beams in the shape of a cross with spikes embedded to hold each candle. This light source was commonly found in monasteries and wealthy castles. Candles were quite expensive and often rationed until the black of night. Only the rich could afford such a luxury. To maximize the effect of lighting, chandeliers were often placed near mirrors to increase the reflection. Shiny furnishings from this era have been discovered that were also utilized for this purpose. 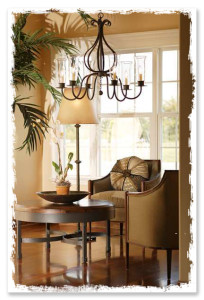 The wooden chandeliers soon gave way to metal due to the candle grease that ruined any type of wood. Popular metals included iron, copper, brass and silver which are still utilized for construction today. The 17th century saw a rise in popularity as candles became cheaper. Chandeliers were found in just about every home and soon began to take on ornamental designs. By the 19th century, this light source was a work of art, often crafted by skilled blacksmiths to include intricate design patterns. With the invention of electricity, the chandelier continued its progress. Crystal glass was added to reflect and spread light. It was easy to cut into shapes and added a unique look to the chandelier. Some of the most famous works can still be seen today in mansions, abbeys and retired castles.

As crystal chandeliers became famous, metal designs seemed to fall to the wayside. Homes sought brighter light sources and the crystal glass fit this bill. Royalty found the crystal to be elegant, often displaying tiered chandeliers that covered a huge amount of the ceiling. The current popularity in wrought iron has reemerged, however. Talented craftsmen utilize the age old techniques to restore the beauty of a once elaborate product. This unique metal is heated and shaped with the basic tools of the trade. Countless hours are spent on one creation alone to produce an authentic work of art. Forging wrought iron was once the job of the town blacksmith who created plows, tools and gates. Now that same trade is considered a highly skilled art form.

Although candles were replaced with electricity, the beauty of an open flame flickering off walls and mirrors remains to be a thing of splendor. Modern wrought iron chandeliers give homeowners the option of electric or candlelight. Many are designed to hold numerous tapered and votive candles for that romantic look in any room. The nostalgia behind this light source brings forth a sense of comfort and warmth. With an abundance of candles in all shapes and sizes, there is no problem utilizing this chandelier often. Guests will enjoy the ambiance and the beautiful hand-crafted patterns of the wrought iron. The lustrous metal is sure to become quite the conversation piece as well as a great family heirloom.