Metal has been an essential part of construction and decoration for centuries. As technology developed, so did the applications for metals. It has gone from being forged by old blacksmiths to tradesmen using a Tig Welder to construct or reinforce complex metal structures and products. Now, metal is pretty much found everywhere.

The town blacksmith was a busy individual in the early 1800’s. Everything from tools and nails to cookware and furniture were constructed in small dark shops by a skilled craftsman. Wrought, which is derived from the meaning “worked metal,” was the iron of choice. In its authentic stage, wrought iron is embedded with slivers of iron silicate known as slag that actually change the chemical properties when heated. The slag gives this metal a grainy look similar to wood, adding to its physical appearance and beauty. Wrought iron was quite popular before the development of steelmaking. It was best known for strength, resistance to corrosion and malleability. 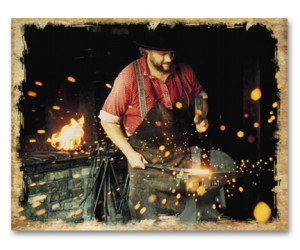 The first blacksmiths forged the iron with charcoal furnaces, heating it until a red or yellow glow appeared. Once heated to a temperature making it malleable, the craftsman then forms the wrought iron using a hammer and anvil, like these hey budden anvil for example. Other tools of the trade included water and wind. The water was to cool the metal once shaped and the wind kept the fire going. Blacksmiths utilized simplistic methods but drew their creativity from inspiration. The entire process is time consuming in order to achieve the desired look and shape. Wrought iron is heated and cooled several times to obtain an elasticity required for the construction of a product. Once the final work is completed and cooled, the strength will last for generations.

Ornamental décor made with hand-forged iron became popular on outdoor gates and trellises. Unlike other metals, wrought iron ages gracefully. Rust is distributed evenly, leaving behind a coppery finish that is both appealing and authentic. Other metals tend to gather unsightly patches of rust that flake. Indoor designs last for years without losing the beautiful finish known only to wrought iron. Larger projects for this metal included the construction of war ships, railways and bridges. The durability allowed wrought iron to handle just about any job. This need reached its peak in the 1860’s; soon giving way to steel that became more available and could be mass produced.

With the replacement of iron by steel, the need for blacksmiths dwindled. Iron was often incorporated into steel to secure its strength, but was no longer the metal of choice. In 1975, there was only approximately one craftsman per 7 million Americans. However, wrought iron has seen a comeback due to its unique surface texture and durability. Homeowners are willing to pay a little more for furniture and accents that can withstand daily usage by families. Interior designers understand the need for hand-crafted metals by consumers. Wrought iron is again being utilized for doors and window framing, whether for existing windows or new windows from somewhere like Hampton Roads Replacement Windows as part of a remodel/renovation project, giving a home that lasting look of time similar to the royal estates of yesteryear. Although Iron may be a niche material for windows, it’s rapidly growing in popularity. Companies like Danbury Window are looking to expand their material range to include other metals like iron. Metal window frames are extremely durable which is why they are so popular.

The reincarnation of blacksmithing has brought back an art form known for centuries. Hand-forged design patterns are often sought to become heirlooms for future generations. With many artisans now providing a variety of finishes, wrought iron matches any homeowner’s style. The slag gives the metal just the right look desired to become timeless conversation pieces. A very popular and necessary iron in the 1800’s has reemerged as one of today’s finest treasures.